The principal activities of the Hills Model Railway Society Inc. is to promote the hobby of model railway construction, operation and history to society members, public and statutory bodies, to attend and hold displays at model exhibitions and other venues from time to time.

The HMRS Inc. has members interested in Australian, American, British, Japanese and European prototype model railways, covering the 3 common scales, HO, OO and N. We enjoy discussing our models and layouts and visitors are welcome to our society rooms at Baulkham Hills by invitation, by contacting a committee member listed on the Contacts page or by sending us an email by clicking here.

New members may bring their own layout applicable locomotives and rolling stock to suit the above and be assisted in the operation of our club layouts. We can also assist in DCC locomotive configuration to enable operation on these multi-user environments.

INFORMATION SHEET
The year was 1983, when a meeting was held in the 4th Castle Hill Scout Headquarters to find interested parties to form a local model railway society.
The meeting was attended by a group of 25 interested model railway enthusiasts who came together with a common interest to foster and promote the hobby of model railways in the Hills district of Sydney.
The first thing they had to do was to find a home in the shire of Baulkham Hills NSW.
After considerable time and effort, and assistance from the Baulkham Hills Shire Council, accommodation was located at West Baulkham Hills where old and disused buildings were located. The Society Inaugural meeting was held on 20th July 1983 and by 14th November 1983 there were 16 members. The Society’s original layout was constructed from material donated by the members. The layout ‘HO’ scale was called Sandy Hollow and was constructed in 1984. By 1986 the membership had climbed to 36 with 6 junior members. On the 13th May 1987, the society became incorporated and is known as ‘Hills Model Railway Society Incorporated’.
The principal activities of the Hills Model Railway Society Inc. is to promote the hobby of model railway construction, operation and history to society members, public and statutory bodies and to attend and hold displays at model exhibitions and other venues from time to time.
Each year in May, we hold the annual Hills Model Railway Exhibition and all members are expected to assist with the exhibition.
Our society rooms are open every Friday night from 7.30pm and other times by appointment. The society has 2 club running layouts, built in ‘OO’ and ‘N’ scales. We also have two exhibition layouts. One in HO “Springfield” and One N Scale “Roydon”. We also have Australian ‘HO’ scale layout under construction named “TULONG” and nearing completion. The exhibition layouts are DCC with the clubs running layouts being DC.
A once only joining fee applies to all new members with annual subscriptions for single members, junior members and family membership also available. Due to increase in the accommodation rental an additional levy applies per member each year. There is also a weekly $5 facility charge, payable when members visit the rooms and covers any number of visits per week.
The HMRS Inc. has members interested in Australian, American, British, Japanese and European prototype model railways, covering the 3 common scales. We love discussing our models and layouts and visitors are welcome at our society rooms in Baulkham Hills, for more information contact our secretary by mail or contacting a committee member.
Happy modelling and may all your trains stay on track.
Established: 1983

Click on the thumbnail photo below to see the photos of our first layout.  You will see:

In the mid 1980’s, a group of club members decided to model a current working station in New South Wales. Armed with paper, pencils, measuring things and cameras, these enthusiasts descended on the unsuspecting township of Bundanoon, which is between Moss Vale and Goulburn on the main Sydney to Melbourne rail line.

Modelling real-life has many pitfalls and this layout was no exception. As soon as the trackwork was firmly fixed to the layout’s baseboard, the State Rail Authority sent their anti-modelling SWAT team to Bundanoon to remove sidings and alter point work. Thus, the layout represented the historical ‘what was’, rather than post the unexpected changes.

This HO gauge layout was modelled around the late 1980’s period, comprising eight sections on an ‘L’ girder frame covering an area of 7.1 by 2.4 metres. Originally Bundanoon comprised a double track mainline, crossovers at each station end, a goods siding and shed, plus an up/down refuge. The opposite site of the layout called Cooroo, is a freelance station with double track mainline, dual station crossovers, plus a refuge on the outside main. Two entrance tracks feed a turntable to a six track round house.

With construction complete it was displayed at many club exhibitions and depending on the operators at the time, various locomotives and rolling stock were operating from many eras. The Bundanoon layout has long since been retired from our club after many years of operation but proved a learning experience for future layout construction. 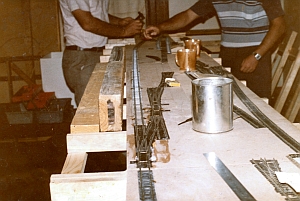 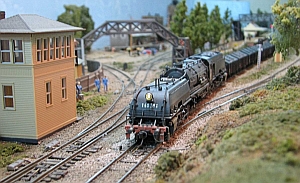 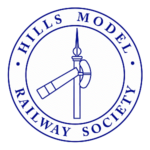 Welcome to the online home of the Hills Model Railway Society Inc.